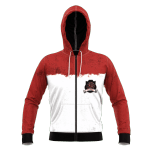 Would you follow a brave leader fighting to free oppressed and enslaved people, who claims to embody those treated unjustly and are now seeking justice? Would you die for someone who seeks to unite all under her rule so that conflicts would cease and there would be a lasting peace? Khaleesi Daenerys Targaryen, the Mother of Dragons and self-styled Breaker of Chains, fights for these things, and she will use every resource in her power to achieve her goal. She has united a massive army to reclaim the Iron Throne from the enemy, so that she may rule and finally bring justice and peace to the Seven Kingdoms of Westeros, all ravaged by never-ending battles. There are those, however, who remember that she is of the Targaryen line, a house that is fated to rule over everything, but is also afflicted with the Rule of Madness, driving members of the house to one form of insanity or another.

The Team Targaryen Unisex Zipped Hoodie marks you as a follower of the Khaleesi, an apostle of the Mother of Dragons, a believer that fire and the might of the beast should rule over all. This zipped hoodie is also ideal for any kind of activity or setting that requires a comfortable sweater, as it is made of pre-shrunk 2-way stretch 100% premium microfiber polyester material. Wrinkling, shrinkage, abrasion-damage, and even mildew is absolutely no problem at all, as it is incredibly strong, durable, and resistant to these concerns. The colors and print will not fade regardless of wear and washing, courtesy of a high-definition sublimation printing technique used on every square inch of this hoodie.

The alluring beauty of the members of House Targaryen has often been instrumental in winning the loyalty of many followers, apart from the fear they invoke because of the dragons who serve their cause. Beware the allure of a Targaryen, however, because behind the beautiful light of their eyes hides the yawning pit of madness that has always consumed them eventually.