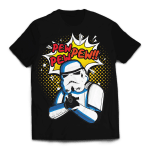 "If you can't hit it, someone else in our battalion will!"

This appears to be a very apt motto for the Stormtroopers of the Empire, the largest fighting force in the galaxy with the sad reputation of being terrible shots. It just seems that they can't hit anything they are aiming at, and that fact is captured in the brilliant imagery of this shirt. All is not lost, however, as there are two valid reasons why a Stormtrooper's bad aim will not diminish the Imperial military.

One, they are the largest standing military force in the known galaxy. They outnumber even planetary forces in the Empire, which is why these planets are under the rule of the Empire in the first place. If you have that many shooters fighting for you, it doesn't matter if none of could hit the side of a battleship, one of them is bound to score a hit sooner or later. Multiply that single lucky shot with the other multitudes of Stormtroopers, and you are sure to win.