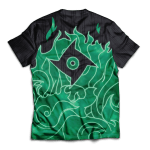 In many instances, the noblest and most courageous of heroes are also the most tragic. One such noble hero is Shisui Uchiha, one of the most powerful and most gifted members of the Uchiha clan. His dedication to doing what is right ultimately cost him great pain and even his life, but not once did he waver in his determination to do what was right. This was most evident when he sacrificed all of his power and even his life to ensure his phenomenal abilities would not fall into the wrong hands, and that his clan would not go into war with the entire community. Having given his eye to his brother Itachi, Shisui's� passed his powers onto his brother Itachi, including the ability to manifest a powerful Susanoo. Shusui's Susanoo not only gave enough defense to protect him even from explosives, but could also launch a counteroffensive enough to take down an entire mob of warriors. Feel the power of Shisui's Susanoo with the Shisui Susanoo Unisex T-Shirt.

This shirt is both immensely comfortable and incredibly durable. It is highly resistant to wrinkling, shrinking, abrasion damage, and even mildew. The rich detail and vibrant colors of this shirt will not succumb to any amount of washing, as it has been imprinted using a high-definition sublimation printing technique, ensuring that the design and colors will not fade, chip, or flake away.

Even the noblest of intentions tend to be misunderstood at times, which is why people like Shisui Uchiha had to master methods to both protect himself from large and powerful attacks as well. Both of these he could do with his Susanoo, the blazing design of this shirt.