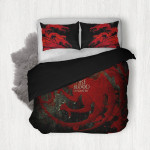 The Targaryens, although hailed as the rightful and eternal rulers of all of Westeros, are greatly feared by all in the Seven Kingdoms, mostly because of how they impose their rule of law. It is known that while they do have more than enough military might to crush practically any foe, the Targaryen rulers also have a preference of letting their dragons have their way with their enemies.

A full-grown dragon could belch enough fire to complete combust a human being, reducing the body to charred ash, before the poor human even runs out of breath during the death scream. Full grown dragons could also reduce entire armies to ash in less time it takes for most people to draw their sword. This is how devastating dragon fire could be, and under the command of the old Targaryens, dragons were nothing short of flying death.

This is why the rule of the old Targaryens were mostly described as the rule of "Fire and Blood" since anyone unwise enough to oppose them would either be reduced to ash due to dragon fire or have their blood stain the swords of the Targaryen army.